Skip to content
Home › Inverter Generators › Generac 6866 IQ2000 Review
Affiliate Disclosure: BestGenerator.org is supported by our audience. As an Amazon Associate we earn from qualifying purchases.

At 1600 running watts the Generac 6866 may not be ideal for powering a lot electronics at the same time but do its other features justify it as a good low capacity portable generator? Can it compete as the alternative for the Honda EU2200i?

Read on for the Generac 6866 iQ2000 review. We dive into its technical specs, user reviews and how it compares to other portable generators in the same range and similar inverter generators.

Generac are known for their home standby generators but they also produce a range of portable generators such as the Generac 6866 iQ2000. This particular model is lightweight and very silent, with decent power output.

At 1600 running watts, the Generac 6866 may not be ideal for powering a lot electronics at the same time, but do its other features justify it as a good low capacity portable generator? Can it compete as an alternative for the Honda EU2200i?

Read on for the Generac 6866 iQ2000 review. We dive into its technical specs, user reviews and how it compares to other portable generators in the same range and similar inverter generators.

The Generac 6866 iQ2000 is a strong competitor in the 2000 watts inverter generator category. It scores well on portability, run time and ease of use.

The most notable feature this model brings to the table is its sleek and useful LED display, which makes monitoring easier. Additionally, EasyStart technology gives you an exceptional amount of control by allowing you to switch between 3 different modes.

The LED display is easy to read and detailed, which is useful for professional use. However, you do lose a DC outlet and USB port for this LED display.

The EasyStart technology hikes up the rating in how user friendly this generator is. There is a simple turning knob and pull start that does not have too much resistance.

The three modes, Turbo mode, Standard mode and Economy mode, let you adjust the power output to the connected load. Having 3 different power modes is rare in smaller inverter generators so this is a welcome feature.

This is not the most powerful inverter generator, so the users that go for this model are likely keeping its parallel capabilities in mind. It is a very portable inverter generator so carrying two of them around is still doable.

A 2000 watt inverter generator is best used for charging sensitive electronic devices like laptops, mobile phones, drones and DSLR cameras. Since inverter generators are more quiet, they are a popular off-grid power source for camping trips and outdoor activities.

The generator weighs just over 46 pounds which is lightweight enough to carry in one hand. The u-shaped handle in the middle make it both comfortable and highly-portable.

As for noise levels, an inverter generator always scores better than a conventional portable generator, but how silent is the Generac iQ2000? The noise level of this generator depends on the mode that it is running on, with Turbo mode being the loudest and Economy mode the most quiet.

Generac does not mention the rated noise level in its spec sheet but does claim that it is more quiet than a Honda inverter generator. Independent reviewers report the noise level at 53 decibels from a distance of 20 feet when on Standard mode (which is about the same amount of noise as two people having a normal conversation).

The fuel tank is just over 1 gallon, which is common for inverter generators of this size. The expected run time at a 50% load is 5.7 hours and 7.7 hours at a 25% load. 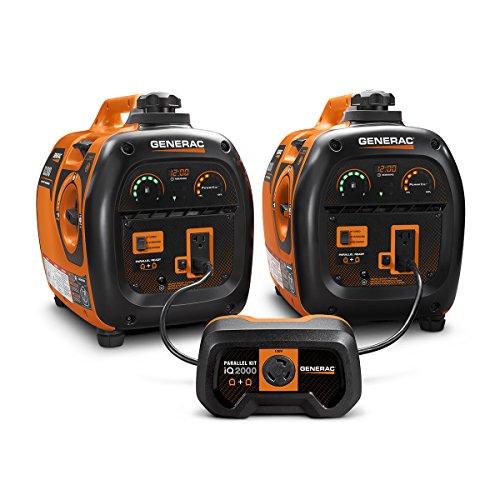 While the Generac iQ2000 has both portability and performance, the question remains: does it need more power? While the answer may be “yes” depending on your intended use, this particular generator is parallel capable so you can connect a second iQ2000 using a parallel kit for twice the amount of power. 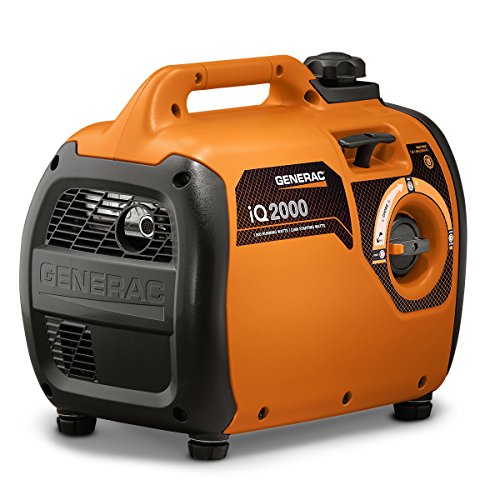 For a small portable generator, the control panel is quite informative. The top of the control panel almost reads like the dashboard of a car with 2 LED displays for the fuel gauge and output. The top also displays the amount of run time left before you need to refuel.

The lower half of the control panel features 2 120 volt outlets, a simple switch to change modes and circuit breaker. There is no DC current outlet on this model.

To start the engine, you don’t need to press any buttons on the control panel but twist a turn knob on the side. This is right below the pull cord for its manual recoil system.

Switching between the 3 different modes, Turbo mode, Standard mode and Economy mode gives you more control over the fuel consumption and noise. Check the power bar to see how large the load is and adjust the mode accordingly.

Another notable difference between these generators is the control panel. There is something to say for both types of control panel, and in the end preference falls to the user.

Where the 6866 has a flashy LED display panel, the 7117 is resilient and specifically designed for outdoor activities. The latter has a DC outlet and USB port (which the 6866 lacks), each of which come with a protective cover.

The monitoring features are also different on these two models. Where the iQ2000i displays the fuel gauge and output, the GP2200i has a basic indicator light to show it is on and an indicator light warning for low oil levels and overloading.

The fuel consumption of the Generac GP series is more economical. The GP2200i run time at a quarter load is nearly 3 hours longer. This is perhaps why there is only one alternative mode option on this model, the Economy mode.

Both models are parallel capable but the inverter generator in the GP series is more affordable than the Generac 6866. So, if you are looking for two separate portable generators, take a look at the GP series.

The Generac iQ2000 beats Honda. Or so goes the marketing tactic of Generac for their Generac 6866 iQ2000. So, let’s take a look at the specs and user reviews of both these inverter generators and see how they compare to each other.

Though the Generac iQ2000 marketing never directly states that it challenges the Honda EU2200i, this is the most similar inverter generator. According to its product description, the Generac is supposedly more quiet, easier to start and has a more informative control panel.

At a user-reviewed 53 decibels, the iQ2000 is the more quiet inverter generator but the difference in noise level is really minimal. The Honda EU2200i has a rated noise level of 57 decibels which is still quiet but a difference of 5 decibels is noticeable.

As for the more informative control panel, the 6866 also has the upper hand. The control panel of the EU2200i is very basic and does not let you monitor as closely.

The unique dial to start, stop and run the Generac 6866 is a unique feature that the Honda does not have. The Honda model uses the simple manual recoil system, instead.

Then there is the difference in weight. The Generac iQ2000 weighs just 0.8 pounds less which is a very slight difference.

Is this small difference in weight significant enough for it’s portability? Both generators have a u-shaped handle so does this small weight difference make the Generac more portable?

The Honda is not the only Japanese generator brand that could be called competition for the Generac 6866 iQ2000. Another similar inverter generator is the Yamaha EF2000iSv2.

This small inverter generator has the look of a transistor radio and is actually quite similar in size, too. It weighs less than 45 pounds beating out the American product.

A final advantage of the Yamaha EF2000iSv2 is that it is CARB and EPA compliant, whereas the Generac is not. If you live in California then the 6866 is simply not an option.

The Generac iQ2000 is a very user friendly portable generator. Not only is it intuitive, getting the engine started does not take as much effort as certain alternative models. Reviewers report that a single pull of the starter cord is sometimes already enough for the engine to run.

Another advantage lies in the small detail of the LED display. This reflective light makes it easier to read in the dark making this model a good option for camping.

Also, the LED display is quite detailed, which beats out other portable generators that only have a simple indicator light. Especially useful is the digital display that shows exactly how much time is left before the fuel runs out.

The weight of the iQ2000 is also on the lower end of similar inverter generators which is appreciated for outdoor activities. The few shaved pounds also works to your favor when you are looking to make use of the parallel capabilities.

A commonly reported issue with this generator is that it leaks fuel. Several reviewers report issues with the carburetor and the fuel hose, sometimes straight out of the box. This is a serious issue so take care to regularly check for any leaks, even when you are not using it.

Another complaint in reviewer comments is that the generator struggles with high altitude. Even with a parallel connection, the iQ2000 can lose steam due to air pressure difference.

One unfortunate design feature is the lack of a USB port and DC outlet. This is surprising for an inverter generator of its class, since a DC outlet and a USB port are nearly an expected feature.

Overall, the Generac 6866 iQ2000 is a good option for a portable generator in the 2000 watts category. It is easy to monitor the output of this generator and also easy to control the output thanks to its different modes.

However, within the same price range it is possible to get a slightly more powerful inverter generator with 2200 watts starting power. For certain uses, these 200 watts extra are worth it. On the other hand, the portability of this model is ideal for a parallel connection which delivers even more power.

From the user reviews, professional reviews and technical specs we can conclude that this is a highly-intuitive generator with a good amount of functionality, control, and power output. If monitoring and portability are the most factors to you, then consider the iQ2000.