Product Description: The Goal Zero Yeti 1400 tackles the biggest drawback of solar power generators - having a lower capacity than fuel-powered generators. This compact and lightweight portable generator has an impressive continuous output of 1500 watts and surge power of 3000 watts.

Goal Zero produces portable power stations. These are fitted with a rechargeable battery that you can either plug into any regular wall outlet or connect to solar panels for clean energy.

The Yeti 1400 is one of their more popular models since it is a versatile midsize capacity battery-powered power station. This compact box-shaped device has a continuous power output of 1500 watts and a surge power capacity of 3000 watts.

This amount of continuous power is similar to the running power of a 2000-watt inverter generator. However, this solar generator is capable of 50% more starting power.

The Goal Zero Yeti 1400 tackles the biggest drawback of solar power generators – having a lower capacity than fuel-powered generators. This compact and lightweight portable generator has an impressive continuous output of 1500 watts and surge power of 3000 watts.

If you are looking for a more environmentally friendly and silent option as an off-grid power source, this might be the one for you.

We studied expert reviews, user comments and the product spec sheets and manuals very carefully to give you this complete review of the star generator by Goal Zero, the Yeti 1400. Read on to learn more.

About the Zero Yeti

Goal Zero produces portable power stations. These are fitted with a rechargeable battery that you can either plug into any regular wall outlet or connect to solar panels for clean energy.

The Yeti 1400 is one of their more popular models since it is a versatile midsize capacity battery-powered power station. This compact box-shaped device has a continuous power output of 1500 watts and a surge power capacity of 3000 watts.

This amount of continuous power is similar to the running power of a 2000-watt inverter generator. However, this solar generator is capable of 50% more starting power.

Low capacity has been the main disadvantage of solar generators for many years but the recent improvements in solar energy efficiency are translating to portable power stations with a higher capacity, as well. The Goal Zero products are proof of that.

Some of the advantages of using a portable power station are direct device connections, quiet operation, lack of exhaust fumes and the limitless free supply of clean solar energy.

What sets the Yeti series apart from other brand series is that it is also technologically advanced. You can control the generator remotely, whenever it is connected to Wi-Fi, through the specifically designed app.

In short, this solar generator is challenging the superiority of 2000-watt inverter generators. It offers similar running watts, clean and quiet operation with a user-friendly remote controlling system.

In this case, the Yeti 1400 has a capacity of 1425 watt hours. This is enough to charge a smartphone 70 times and a laptop 23 times but it can also keep a refrigerator running for 23 hours or an LCD television for 14 hours.

If you plan out which electrical appliances to connect at what time, this small battery will last you longer than the average inverter generator with a full fuel tank. To compare, a majority of the 2000 watt inverter generators have a run time of 8 hours on a 50% load. 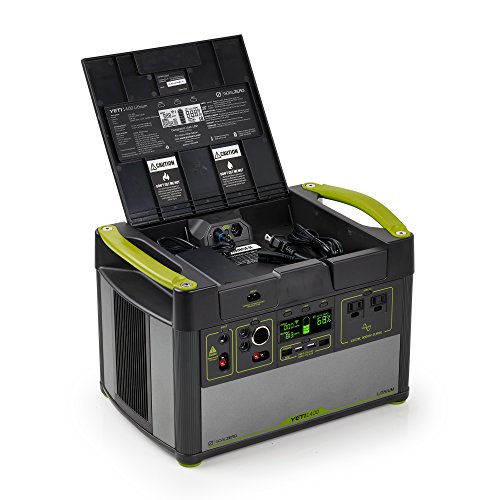 There are 7 ports available on the control panel; 2 AC current 120 volt outlets, 1 DC current 12 volt outlet and 4 USB ports. Use an extension cord and the battery pack is capable of handling 10 connected devices at the same time.

The battery that Goal Zero uses for this model is a lithium-ion NMC battery. One downside of portable power stations is that they have a long charge time and unfortunately this model does, too.

You can charge the battery via any regular wall outlet which requires a time of 25 hours for it to reach full charge. The alternative is connecting the device to solar panels which gives you a charge time of only 4.5 hours when using 360 watt solar panels.

Goal Zero recommends the Boulder 50, Boulder 100 or Boulder 200 as the most compatible solar panel. However, a full charge with these solar cells is also lengthy; 56 hours, 28 hours and 14 hours, respectively. 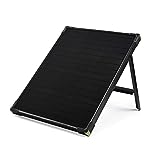 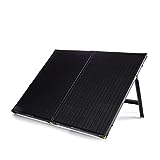 The battery pack itself is housed in a water-tight encasing and can be replaced but the manufacturer promises a long lifespan with minimal maintenance requirements so it is unlikely that you will have to replace the battery. It features a battery management system that prevents short circuits, overcharge and current spikes.

The plus point about charging with solar panels is that you can continue using the generator while it is charging. This model allows for pass-through power meaning that simultaneous charging and drawing power is no problem as long as you watch the load.

This solar generator has a cooling system but it is best suitable for use in temperature climate with a recommended outdoor temperature of 32°F – 104°F. So, this is not the best generator choice for extreme winter conditions.

The most unique feature of the Yeti series is that it has its own dedicated app that you can use for monitoring, controlling and updating the firmware on your solar generator. Connect the generator to a Wi-Fi network and link it to one or more mobile devices through the app.

Use the app to monitor the amount of charge left, turning it on/off or even disconnecting individual ports. You can use the same app on the same device to control and monitor several Yeti power stations. 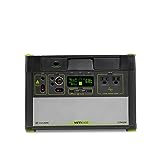 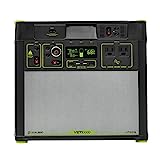 This model is even closer to a fuel-powered inverter generator since it also uses a pure sine wave AC inverter to produce clean energy with minimal THD. This is an special feature that is hard to find on other solar generators.

Besides this special feature, the larger model also has all the other benefits of the Yeti series. The Yeti 3000 also has a dedicated app for remote monitoring, battery management system and water-tight battery casing.

Where this model is different is in its size, weight and capacity. This model is slightly larger but a lot heavier since it weight over 68 pounds.

However, this extra weight is expected for a higher capacity generator. For example, the Yeti 3000 can charge a smartphone 150 times and a laptop 58 times which are both double the rated capacity of the Yeti 1400.

Surprisingly, the charge time of the Yeti 3000 is not longer thanks to the Maximum Power Point Tracker (MPPT) that is already pre-installed. For example, using the regular wall socket plugs (included) the charge time is still 25 hours but this drops down to 10 hours when you make use of the MPPT technology.

So, if you have the budget for it then the Yeti 3000 is a good choice. It has several extra perks compared to the Yeti 1400 without compromising on other Yeti Series advantages.

On the other, there is a serious price difference between these two models. If you are not planning on using the solar generator intensively, then the capacity of the Yeti 1400 should be enough to see you through.

One other solar generator stands out for us and that is the Humless L-1500. Its features may be quite different (check out our full review here) but its capacity is similar.

Both generators have a continuous power rating of 1500 watts but the L-1500 has a much smaller capacity of 600 watt hours. Yet, the Humless model is marketed as home back-up generator so where does this idea come from?

The L-1500 also has pass-through capabilities so it can charge from the solar panels included in the set while you are drawing power from it. However, these solar panels are the only way to charge the battery so you cannot charge the L-1500 through a regular home outlet.

This makes it a true solar-powered generator but this does reduce its versatility. The Yeti 1400 still remains the more user-friendly option.

The pass-through technology is a big advantage. If the load is monitored along with the charge rate, you technically never have to run out of power.

Another advantage is its high surge power of 3000 watts. This is double its running power which you never see in an inverter generator so it definitely a selling point.

Of course, there are the standard advantages of using a solar generator, too. Solar-powered portable power stations are very quiet in their operation so you can feel comfortable using them in any location or setting.

They are also clearly the more environmentally friendly choice since they do not release any fossil fuel fumes. Since there are no exhaust fumes, these devices are also safe for indoor use which a fuel-powered portable generator never is.

Compared to a conventional portable generator, the Yeti 1400 also has much lower maintenance costs and practically no running costs since you don’t need to buy fuel. This balances out the greater initial investment.

Despite needing nearly no maintenance, these solar generators have a much longer lifespan than fuel-powered generators which also explains its purchasing price. The battery on the Yeti 1400 can hold its charge for a long time and only needs to be charged once every few months when not in use.

The Yeti series does not consist of cheap generators. These solar-powered portable power stations are costly so plan for a budget that is twice or even three times what you would spend on a conventional fuel-powered portable generator.

In addition to buying the battery-powered power station, you also need to purchase accessories. The solar panels are not included in the package so you need to order these separately.

One improvement we would like to see is more AC outlets on the Yeti 1400. Yes, it can handle 10 connected appliances at the same time but you would need to use an extension cord for this.

Another missing factor is the MPPT that you can only find on the Yeti 3000. If Goal Zero already has the ability to significantly reduce the charge time, why not apply this technology to all its models?

In general, we are very impressed with the positive reviews and specs of the Yeti 1400. We can understand why this company is considered so advanced in the solar generator industry.

We like that Goal Zero delivers great capacity in a still lightweight and compact package. These two factors in addition to the characteristic quiet operation make the transition to a clean energy off-grid power source even easier.

The remote monitoring and control through the Yeti app is right on point for today’s tech savvy world. This is a feature that you would otherwise only see on fossil fuel-powered home standby generators so it is very cool to see this on a solar-powered generator.

On the downside, there is the price of the Yeti 1400. This solar-powered portable power station is a serious investment, even before you calculate in the cost of accessories and solar panels.

On the other hand, we can see where this price point comes from. Considering the long lifespan, practically zero running costs, minimal to no maintenance requirements, the purchasing price is an upfront investment that is similar to what you would spend on a fuel-powered generator over a given period.

So, is an upfront investment into a quiet and environmentally friendly generator worth it to you?